MPL Qualifier 3 (MY) Scores and Details

The Last of the Challengers

This was Malaysian teams’ second and final chance to prove they have what it takes to compete with the best in the Mobile Legends: Bang Bang Professional League. It was one last shot for Malaysian teams to show their passion and to show the world they deserve a chance in the spotlight! Teams MyA3, Falcon7Alpha, Team Eksdi, and Equalizer will be advancing to the regular season together with the previous qualifier winners. These teams will be competing to for a total of USD 100, 000. 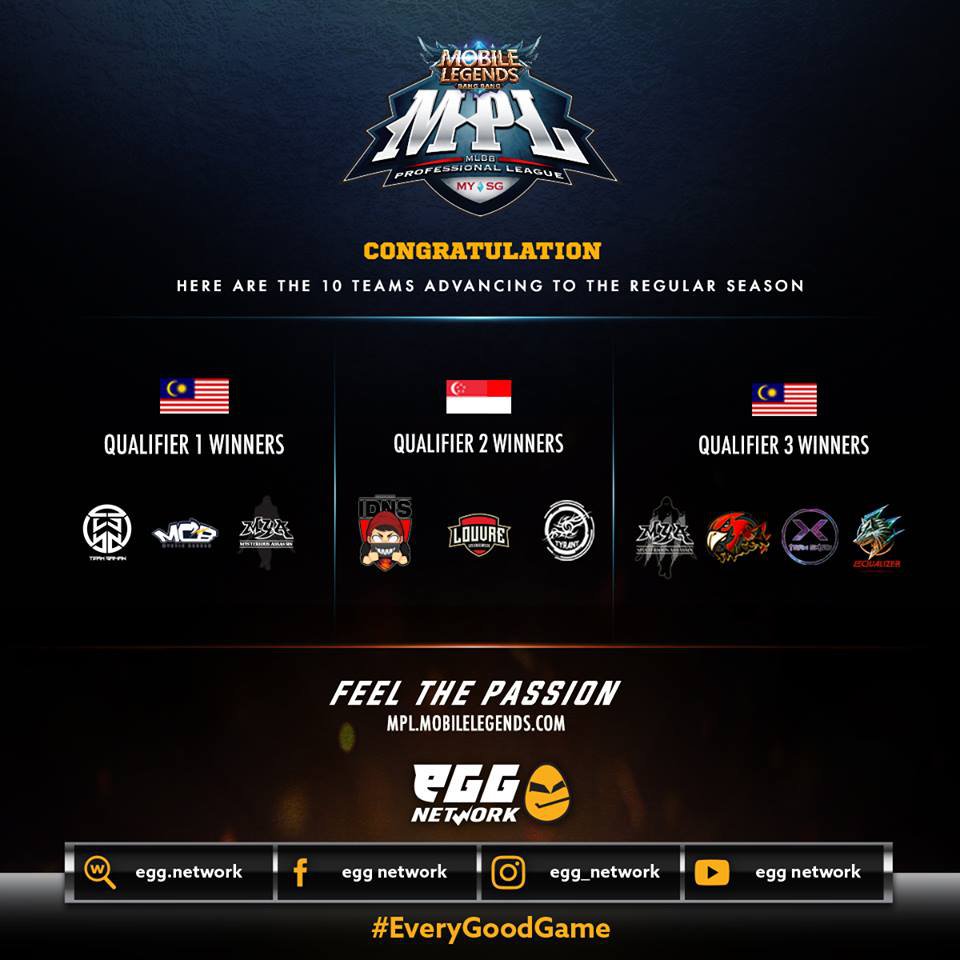 Like their comrades MyA in the first qualifier MyA3 secured their place in the league by defeating XF7 in 2 straight matches. The aggressive MyA3 showed their strength in early game team fights, leaving most XF7’s heroes under farmed during game 1. MyA3 changed up their strategy, taking a more objective based approached eventually bagging the win by forcing a team fight in Falcon7Alpha’s own base.

Game 1 showed us a MyA3 team that knows how to team fight, focusing on taking down key players in their opponents line-up.

Their team thrives with heroes with high mobility, picks like Hilda, Akai and Karrie were great driving forces of MyA3’s strategy; Having 2 tanks allowed them to dive towers and force fights.They dominated the match with constant under-the-turret ganks against XF7.

Applying further pressure in the lanes was their Saber who would quickly rotate to push the side lanes.

Although being out of place in their line up, Karrie was their preferred markswoman of choice. She was used to gank other lanes but her mobility also allows her to stay in team fights longer.

Interestingly, this was the first time Digger has been picked during a streamed match. MyA3.IzzTankeR showed off his ability to play tanks effectively, taking both MVP’s for the series.

This is also the second MyA team to qualify for the regular season. Both teams have a distinctive emphasis on team-fighting well, and when the season begins, it will be worth keeping a close look on the strategies of both teams. Having two teams qualified shows the strength of the organisation, but if both teams use similar tactics and drafts, it may prove to be their downfall.

Strong team play and individual performance were only a few of the qualities shown by Team Eksdi. They were able to capitalize on Equaliser’s mistakes consistently, taking both games and advancing to the regular season.

A team fight focused composition may be their go-to but Team Eksdi has shown that with coordination and skill a team’s potential isn’t restricted to its composition. With picks like Alucard, Grock and Balmond, they excel in full 5 man team fights.

Having 2 heroes with disable is a crucial part of a successful team fight line up, because having key enemy heroes out of the fight can be the deciding factor in winning a team fight.

By pressuring other lanes and utilizing their team fight potential their marksman is free to apply pressure to other lanes.

By winning early engagements and pickoffs Team Eksdi was able to maintain a 4000 gold lead against Equaliser.

Always applying pressure around the side lanes and a massive source of damage during team fights with Balmond, TXD.CoweToPaPA gave Equaliser a difficult time especially Eqz.Orca’s Hilda.

Both teams excelled in balanced line ups but XF7 proved that they were more proficient than Equaliser. This match also showed that teams needed to be able to be flexible with their line ups; Maintaining a line up built on a combo could break a team if their opponent counters it which was seen in game 2 where Equaliser managed to take the win. However XF7 managed to pick themselves up and won the final game to take the series 2-1.

Heroes such as Zilong, Karina, Roger who have high mobility are the building blocks of a good objective-based composition. When supported with disablers like Grock and Rafaela to compensate for the lack of crowd control and durability, a team can be extremely lethal.

Taking towers as soon as possible was Falcon7Alpha’s main priority as well as securing Turtle and Lord. They took these chances while capitalizing on enemy misplays.

Digger’s appearance in MPL is limited due to his high ban rate but when he does come in game he is a valuable asset to most line ups as shown by XF7.Wulala scoring MVP in game 3 with a KDA of 2-0-20.

Falcon7Alpha scored the lowest tower damage in a game. They only managed to deal 37 damage to a tower during game 2.

The last chance for these teams to chase their dreams and get a shot at their passion. AoD managed to hold on against the onslaught but eventually falling to Equaliser. Malaysia’s final qualified team is Equaliser, who will compete in the regular season for a chance to prove their passion and a shot at the 100,000 USD prize pool.

Equalizer showed that they were also capable of pulling off a split push line up with heroes like Yi Sun-Shin and Balmond applying pressure during engagements while an Argus pushed the side-lanes.

Eqz.Pork Chop showed their versatility performing commendably scoring MVP for both games as a Hilda and Gord.

Though both teams were evenly matched Equalizer managed to maintain a 1000 gold lead for the majority of the game.

Are You Ready for the Regular Season?

Watch Mya3, Falcon7Alpha, Team Eksdi, and Equalizer and the previous teams who qualified on 12 January 2018 – 11 March 2018, as they fight for their passion and compete for their spot in the top 8 of MPL’s Playoffs, where they will get the chance to win a portion of the USD 100,000 prize pool.

The Mobile Legends: Bang Bang Professional League (MPL) is an esports league organized by Moonton (Mobile Legends’ developer) and eGG Network (a gaming and esports TV channel) for players based in Malaysia and Singapore. The league features a USD 100,000 prize pool and its purpose is to provide a platform for players to play competitively; to develop their skills and open up possibilities for a career in esports. From qualifiers to playoffs, the league will run for 5 months (November 2017 – April 2018). The regular season runs from (12 January 2018 – 11 March 2018).